Statue of St. Francis and the Wolf : made out of papier-mâché and other materials in the 17th century. The work depicts the Wolf standing erect and looking directly at St. Francis who has a fixed and engrossed look.

Altar: the stone used as the altar is the one on which, according to tradition, St. Francis preached to the people of Gubbio and established the pact between them and the Wolf. It bears the following inscription: “St. Francis, having rendered the wolf submissive by means of the Holy Cross outside of Gubbio, to the great consternation of the populace, conducted that wolf that had been devouring men and animals to this place and preaching on this very stone made it offer him its paw in sign of good faith and acceptance of the pact to cause no further harm to any creature in exchange for being fed by the townspeople and thus it lived in the nearby cave in total obedience to all.”

Madonna and Child with Saints Thomas, Ubaldo and Francis : The canvas depicts the Virgin and Child with Saints Thomas the Apostle, patron of stoneworkers, Ubaldo patron of the town and the craft of masonry, and Francis with the Wolf. Painted around the middle of the 17th century by Giovan Battista Michelini, ( b. Foligno, 1604, d. 1679). The Apostle, Thomas, is holding in one hand a setsquare commemorating the task set him by Gundafar, the Emperor of the Indies, to build the “celestial palace” which is depicted in the background. The figure of St. Thomas is based, with a slight variation of the position of the hands, on the one by Guido Reni painted for the Olivieri Chapel in Pesaro Cathedral.

The Statues of the Saints: from the moment the Ceri are raised and for the whole duration of the Race, they are surmounted by the wooden statue of the Saint, protector of the guild he represents. The Saint symbolises the Cero, the dominant colour of his robes is the same as the uniform of the Ceraioli (yellow for St. Ubaldo, blue for St. George and black for St. Anthony Abbot) and the attributive object he carries (mitre and bishop’s crook for St. Ubaldo, helmet and lance for St. George and tongue of fire for St. Anthony) is their device.

St. Ubaldo is portrayed in the act of benediction and wears a yellow cope with gold embroidery and a jewelled clasp. In addition to his episcopal vestments he is also attired with other accessories: a stole, a collar with a cross, and his bishop’s ring and crook. St. George is enveloped in a flowing blue cloak which covers the back and sides of his horse. His armour consists of a plumed helmet, a shield on his right hand with which he also holds the reins and a lance held in his left hand. St. Anthony is dressed in a black hooded habit and wears sandals on his feet. A black rosary is attached to his cord belt. The traditional tongue of fire burns in his left hand. 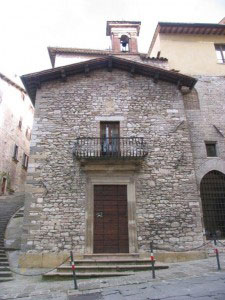 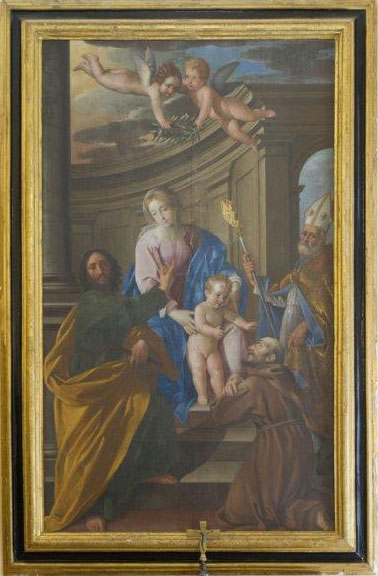 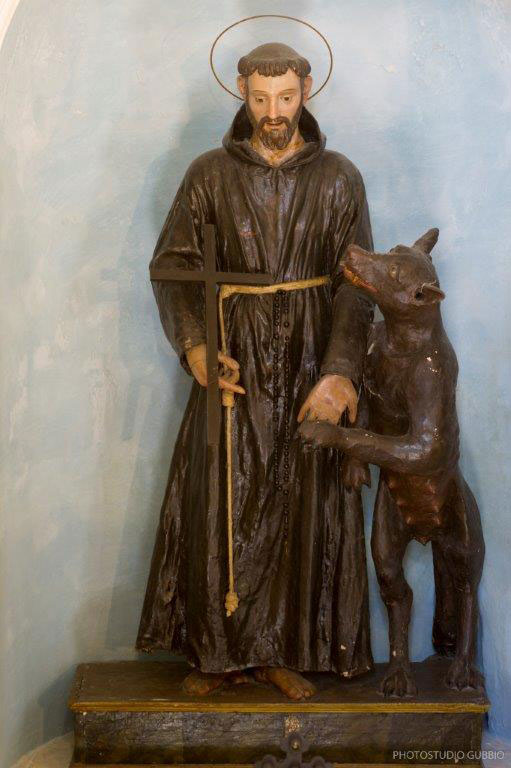