The church and the sarcophagus of the wolf

Above the main entrance in palombino stone it is possible to see a dedicatory inscription “DEO PACEM LARGITORI, FRANCISCO DICATUM “ ( dedicated to God and Francis peace bestower) and the carved image of a wolf.

The church of S. Francesco della Pace has a small single nave . In front of the entrance in a niche a 17th century papier –mache statue representing S. Francis and the wolf. Behind the altar a painting on canvas by Giovanni Michelini ( Foligno 1604 – 1679) : Madonna and Child among St. Thomas the Apostle ( patron saint of the stonemasons), St. Ubaldo ( patron saint of Gubbio and of masonry) and St. Francis with the wolf . On the left the statuettes of St. Ubaldo, St. Giorgio and St. Antonio are on display. Along the corridor and in the sacristy the statuettes and the Ceri Mezzani ( middle size) and Piccoli ( small size) are kept.

In the crypt it is possible to see the Early medieval sarchophagus that covered the tomb of the wolf. It was found in 1873 not far from the church . In the same room a sculpture in cement by Antonio Maria Rossi representing the pact of peace between St. Francis and the wolf. On the right the entrance to the cave where the wolf lived for two years after the meeting with St. Francis. 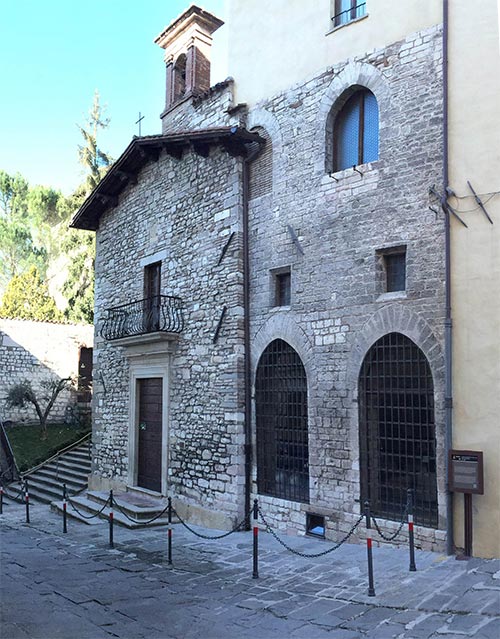 Facade of the Church 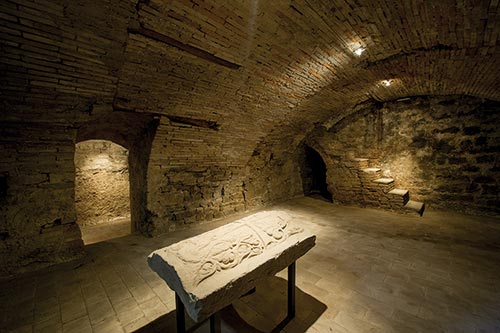 From “ The little flowers of St. Francis”

Pertaining to the most holy miracle wrought by St. Francis, when he converted the very ferocious wolf of Agobbio


During the time that St. Francis dwelt in the city of Agobio, there appeared in the territory of Agobio a very great wolf, terrible and fierce, the which not only devoured animals but also men and women, so that all the citizens stood in great fear, because offtimes he came night unto the city; and all men went armed when they went forth from the city, as if they were going to battle; and therewithal they were not able to defend themselves from him, when haply any man encountered him alone; and for dread of this wolf things came to such a pass that no one dared to leave the city. St. Francis, having compassion on the men of the city, went to the wolf, advanced towards him , and making over him the sign of the holy Cross, called him unto him and spoke to him after this manner: “ Come hither, friar wolf. I command thee in Christ’s name that thou do no harm to me nor to any other. Friar wolf, thou dost much damage in these parts, and thou hast committed great crimes, destroying and slaying the creatures of God without His licence: and not only hast thou slain and devoured beasts, but thou hast also had the hardihood to slay men, made in the image of God; But I desire, friar wolf, to make peace between thee and them”.
At these words, the wolf by movements of his body, and tail and eyes, and by bowing his head, showed that he accepted that which St. Francis said and was minded to observe the same. Thereupon St. Francis spake unto him again saying : “ Friar wolf, inasmuch as it seemeth good unto thee to make and keep this peace, I promise thee that so long as thou shalt live, I will cause thy food to be given thee continually by the men of tjis city, so that thou shalt no more suffer hunger; for I know full well that whatever of evil thou hast done thou hast done it through hunger. But seeing that I beg for thee this grace, I desire , friar wolf, that thou shouldst promise me that never from henceforward wilt thou injure any human being or any animal. Dost thou promise me this?” And the wolf, by bowing his head, gave evident token that he promised it.
And the wolf went with him obediently, like a gentle lamb; wherefore the citizens beholding the same marveled greatly. All the people with one voice promised to provide him food continually and thereafter, the said wolf lived two years in Agobio, and entered familiarly into the houses, going from door to door, neither doing injury to any one nor receiving any; and he was courteously nourished by the people; and, as he thus went through the town and through the houses, never did any dog bark after him. Finally, after two years, friar wolf died of old age, whereat the citizens lamented much , because as long as they saw him going so gently through their city, they recalled the better the virtue and sanctity of St. Francis.